Ok, we fell into the blog trap. That is, the thing where you have a blog but neglect it and don’t update for a super long time. Well I’m back… at least for now.

Remember at the beginning of the year when we started renovating our bathroom? Then when we did a little bit more work on the bathroom?

One big concession we had to make was that we can’t do it all. With work schedules coupled with laziness, we knew if it were just up to us, it’d be a bit more time until our upstairs bathroom was done. So we bit the bullet and hired a drywaller to help us get the bathroom going and to do a few more project – stay tuned for those! 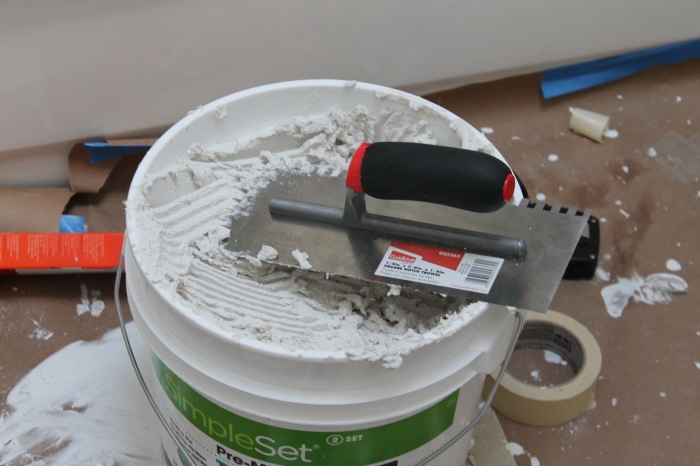 Before the drywall guy got in, though, I had to face my fears and drill a big hole in our brand new roof for the bathroom fan vent. It may not seem like it, but it was a daunting task. I put it off again and again and again out of fear of rain or destruction or just plain doing it wrong.

But the good news, I got it done and our roofer came out to flash and seal it two days later! It was just plain crazy the layers of crap we found trying to get the hole cut, I guess that’s what 90 years of roof looks like.

Then it was of course time to tighten up the actual fan on the inside. Don’t fear, it may look scary now but bear with me. 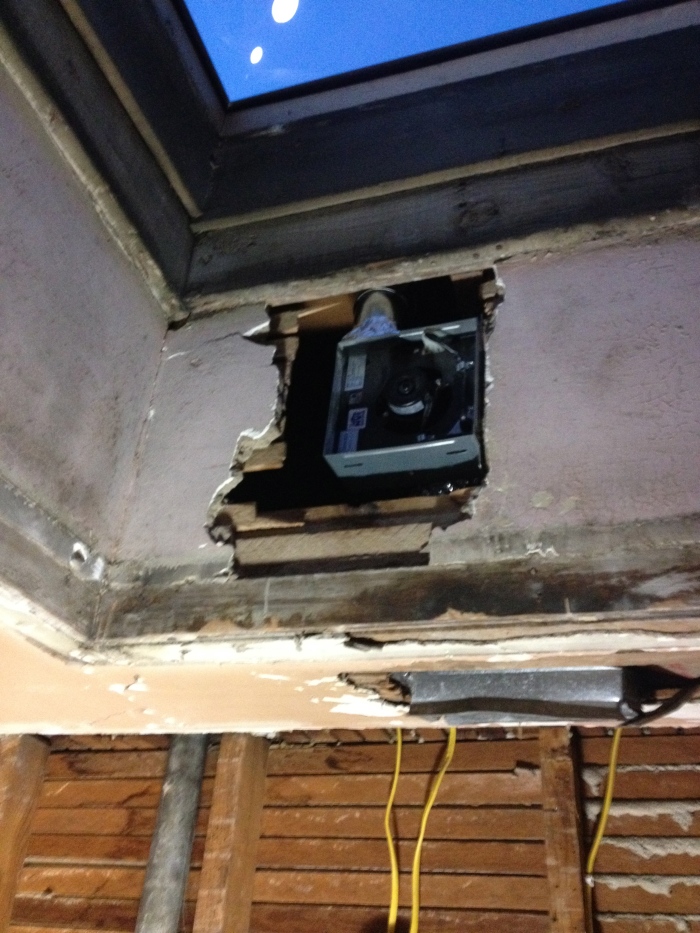 Now it’s time for some walls!

I have to say, we once again got lucky with the guy that worked on the house. He came as a recommendation from another contractor we’ve worked with and was mostly great.

Here’s here it got a little weird. We really just wanted him to put cement board in the tub surround then behind the sink. But, well, he put it up a little higher. We ended up sucking it up, but having to rethink the design of the bathroom. Hey, it’s all character, right?

Then after cement board, it was a whole bunch of drywall. 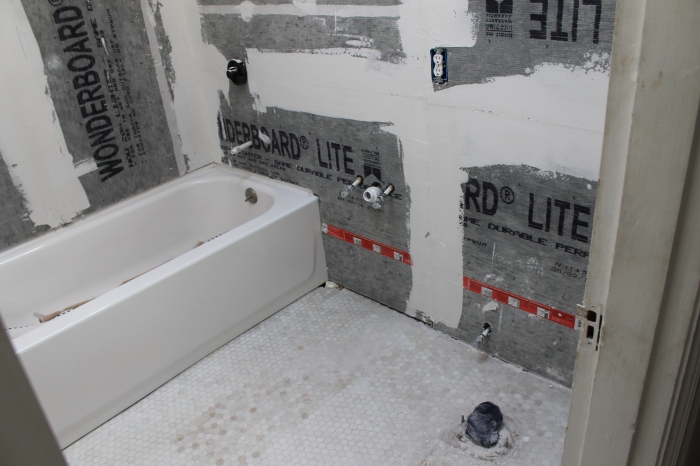 A nice new ledge in the shower (to the left).

Remember that skylight and the fan?

We’re not done there!

To help expedite even more, I was able to get my dad to fly down to help us get tiling. Originally we were going to give it a shot ourselves, which we maybe could have done. But having someone around that actually knows what he’s doing was super helpful. Thanks, Dad! 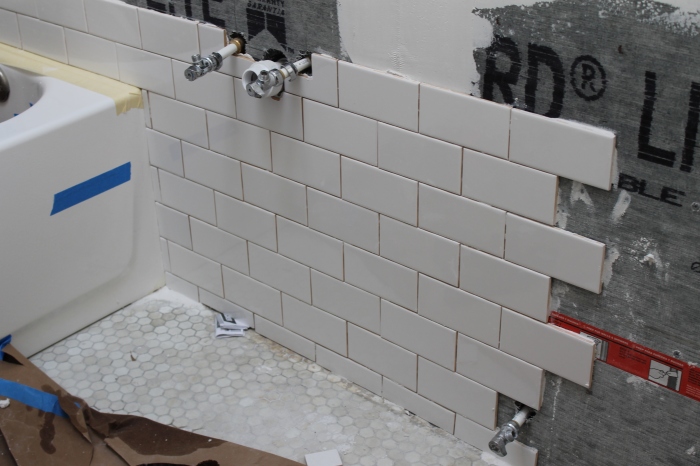 One thing that we were constantly reminded of are the joys of an old house. Even with new drywall up, there are lots of spots that aren’t perfectly even. Places where original plumbing was put in awkwardly or studs didn’t line up exactly.

As you’ll see, the tile had to go up pretty high on the wall to cover the backer board. I was hesitant, but I actually like it. It makes for something a bit different. 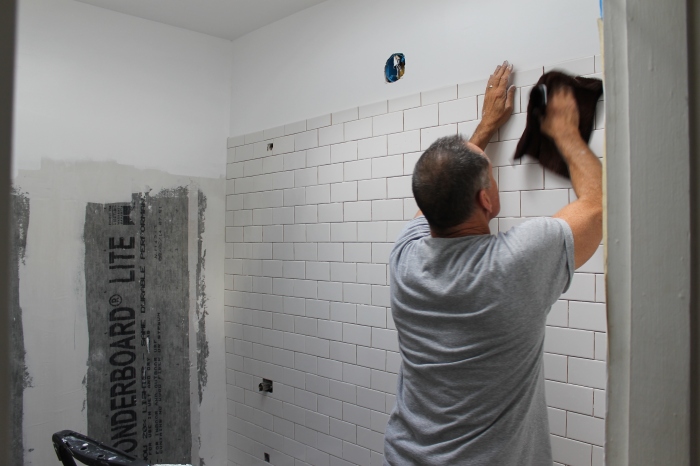 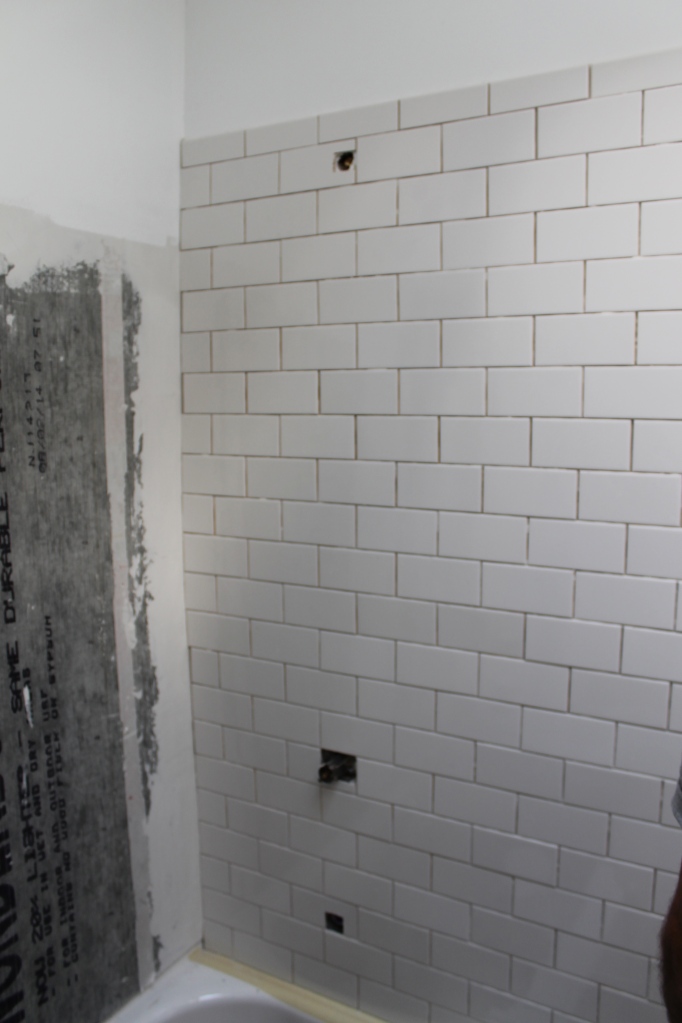 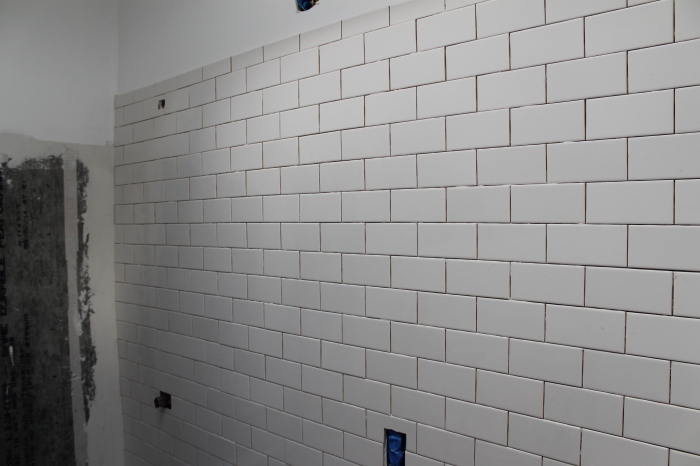 After a lot of work, we got all of the tile up!

We were finally able to install our new light too! 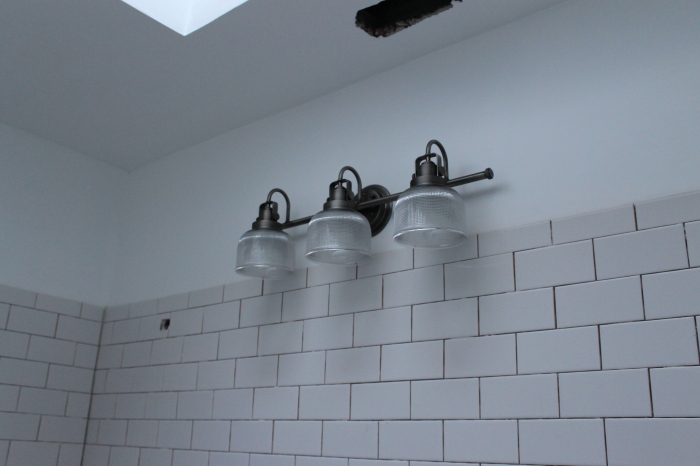 Now in a few days we’ll grout and seal everything up, then get the fixture in and we’ll finally have a functional bathroom again!

3 thoughts on “Wait, you need a bathroom in a house?”